"We should be astonished at the goodness of God, stunned that He should bother to call us by name, our mouths wide open at His love, bewildered that at this very moment we are standing on holy ground."
— Brennan Manning

And off we went Thursday early morning from the Kong bus station in Bouaké. Damaris and I had the privilege to sit in front beside the driver. People entered and left the little bus as we drove further north. The rainy season had turned the landscape into a fresh green: cotton, corn and peanut fields were in full bloom.

By 2pm we arrived in Kong where Seydou and Tata Coulibaly picked us up. Seydou is the son of BaOuleyman, where Rod lived in 1990 to learn the Dioula language. The Coulibaly family is our first address in Kong. This family also has its roots in Bouaké. BaGaoussou, the older brother of BaOuleyman, is the chief of the Kong courtyard in Bouaké and a well-known teacher of the Quran. Through him we announced our trip a few days in advance.

Seydou came with his motor bike and brought our luggage and the 25 kg sack of fresh ginger home. Tata, Damaris and I walked home alongside the 18th century mosque of Kong. We exchanged greetings in Dioula as we passed by people.

Damaris, from Leipzig, is at the end of her master’s study in ethnology and wanted to spend the summer with us in Côte d’Ivoire. We wanted to introduce her with the Dioula people and their capital, Kong.

After lunch and after greeting all the neighbors, we went into town to participate in the wedding celebration. Seven weddings were celebrated that week in Kong. Thursday, late afternoon until sunset, the whole town watched the brides riding on different men’s shoulders as the friends of the groom dance with his future wife to demonstrate their joy for their friend and their strength. It was fascinating.

The next morning, we accompanied Tata to help one of the bride’s mother. As we approached the courtyard we heard drums and singing. Finding out that the whole family and friends were already there since 4am cooking millet porridge for breakfast on a wood fire in a huge cauldron. Later they cooked a huge cauldron of kabato (polenta or corn porridge) and in another pot okra sauce. There were about 50 to 70 ladies who helped. Their main job was to keep everybody happy with dancing and singing. The old ladies used different rhythmic instruments. Only the djembe was played by two young men. To prepare such a big amount of kabato over a wooden fire gets everybody sweating. 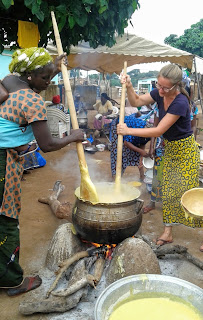 The food then was distributed and a group of ladies brought lunch to the bride, continuing with singing and dancing on their way. There the dance really took off until 3 brides came out of a house and joined in the dancing. This continued every day until Tuesday. 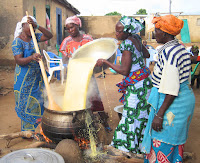 It was a colorful week. In the midst of all there was the national independence day, 7th August, with a parade in front of the mayor’s office.

Damaris gives her insight of the time spend in Kong below, so that you can see a little bit how everyday life looks like.

One Week in Kong, Or: A Fascinating KONGlomerate
Damaris’ Impressions

Long bus tours are not even that bad if you can sit in front and buy roasted peanuts and popcorn through the window. And so our trip to Kong passed by pleasantly quickly. Every attempt to read a book would have disappeared into one of those huge potholes, but thanks to Angelika and her smartphone I could listen to Rainer Maria Rilke‘s „Letters to a Young Poet“ - maybe out of place in the Ivorian bush, but then also not more than me.

Our host family put us into a room next to their little rented house - a room painted in Ivorian blue. That blue in which many houses here are painted (if the owners can afford it) and that makes you feel kind of cool even during great heat. At night, of course, you don‘t see this blue any more, and then the heat keeps you awake, the heat - and the mosquitos.

I had to get used to a lot of things: Washing myself from a bucket, in a shower that was located in the sleeping room of our hosts and also served as a toilet - except for the (big business???). For this, you had to use the squat toilet outside, where in the darkness cockroaches the length of your finger would crawl over your feet. Yey. I would only go by day. I also had to get used to eating with my fingers. That‘s a lot of fun, but it was embarrassing at first, because more food would end up on my pagne and on the floor around me than in my mouth. I also learned that contrary to the title of a popular movie* you better observe birthing goats only from the corner of your eyes, if you don‘t want to be thought of as weird.

In Kong we spend a lot of time „greeting“ people, which means stopping by their courtyard, exchanging greetings and sitting with them. During this sitting and after the greetings, there was not even a lot of talking. Sometimes somebody would put a baby on our lap or offer us a drink of water. Otherwise, we would just sit there while the children and chickens and goats scurried around us. 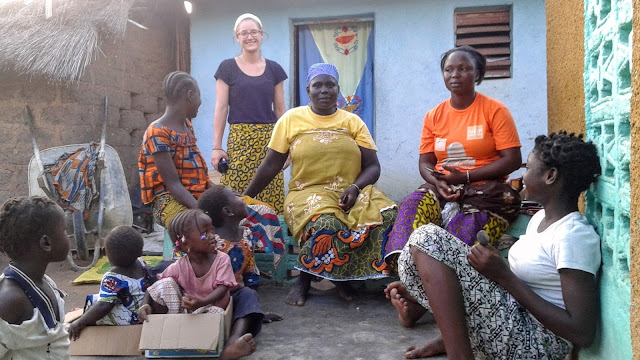 I try to withhold judgements, but one thing I can say without hesitation: Weddings in Kong are different from weddings in Germany. First, because they are longer, they take a whole week. Second, because most of the activities are separated by gender: Angelika and I cooked and danced and talked and sat with the women for days, the only men present being two or three drummers. In Germany gender is only important while bachelor(ette) parties and the throwing of the bridal bouquet. Third, „western weddings“ are the couple‘s „big day“. It‘s about them and their love for each other. In Kong I got the impression that it was only marginally about the bride and the groom. The groom, for example, I almost never got to see, and I‘m sure he could have said the same thing about the bride. But don‘t ask me what it was about instead, I haven‘t figured that out yet. It all felt more community based, more collective, less individual.

Every morning, the women would cook Kabato - maize porridge - in a boiler that was at least as big as the one Obelix fell in as a child. The women would cheer each other on with dancing and singing and clapping, since the porridge has to be pounded well, and that‘s hard work. When the Kabato was done, it was distributed among smaller pots, and then the women would leave with rattles and drums and deliver it to the brides, who sat, beautifully dressed, in a dark room. Most pots the women would take home and eat there.

In Kong, I also rediscovered crocheting. It has the advantage of giving you something useful to do while sitting with people for a long time - it builds a bridge, so to say, between the cost-benefit way of thinking which takes a lot of room in my everyday life in Germany, and the Just-Being-There which I encountered here in Côte d‘Ivoire and which is sometimes not easy to endure. It‘s like a cold withdrawal, and crocheting alleviates it somehow. Angelika and I had the idea of finding out whether the women in Kong would like to learn it. This way, they could make hats or other clothes for their children while sitting at their market stalls. Maybe they could even sell their crocheting products. We found out that wool is indeed available in Kong for a moderate price. And the women then were excited about the first hat we presented to them. Two of them already knew some basic crocheting and we spend a few fun hours with them and the wool in the shadow of our hut. Others began to learn. It would be great to further teach them and thereby spend time with them and be part of their lives, building relationships that do not build on cost-benefit calculations.

Posted by Angelika's Notes at 10:41 AM No comments: